worked together in Bangor SC 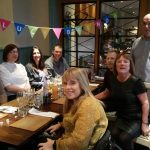 Rich and I met in March 1996 when he joined the contact centre and I was his team leader. All of the team became supportive of each other from the start and continued to be friends even when we moved on to new posts within the centre. I was so fortunate to work with Rich when he was promoted and we became good friends. Our conversation would always turn to travel, fine dining and gin!, On team nights out we would take turns in buying each other a g&t and the banter a few nights before the night out would be whose turn was it to buy. In fact on my retirement in March – Rich did buy the gin. and his note on my card was ‘I,ll miss ya loads but might save afew quid on gins after Friday’ Yes Rich it is my turn so I,ll pour a large gin and tonic for us (Brecon was a favourite) and I,ll miss ya loads too. Nos da and rest in peace xx