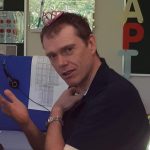 I spent the best part of two years sat next to Rich at work until the end of last year when we both moved to new teams. We had some laughs, like the time I asked him if he was taking part in the Royal theme dress up/down at work and he replied with ‘tell you what, you bring a tiara in and i’ll wear it for the whole day’ I did and he was true to his word, even wore it to the days meetings! He also had to put up with my ‘attempts’ at experimental cooking, i would bring a portion in and he would eat it no matter how bad it was and would always say it was bloody good stuff! Once i made homemade hummus, it had so much garlic in it, it made my eyes water whilst it was still in a sealed tub but he still ate it lol! And the caponata, tagine and a bloody awful strawberry milkshake cake i tried to bake. He always tried to make everyone happy. I remember once when i was telling him about some stretches the physio had given to me for my back and he got down on the floor in Yellow wing, shoes off and showed me a similar yoga pose. Made a few people giggle! He ate fish straight from the tin, drunk coffee you could stand a spoon up in, spilled pretty much everything on his chair or down his top and kept a stash of fruit in a plastic tub on the floor under his desk, he was certainly unique but he had a heart of gold even when he was grumpy. He came out with some fantastic rants now and again and after sitting next to him for so long, i now have a very varied vocabulary! We suffered with some of the same demons and i if it wasn’t for Rich, i don’t think i’d still be here today. I will never forget the words of wisdom, the dry humour, sarcasm, song of the day, the laughs or the time he came to work on his bike and forgot his work trousers!!! Work will never be the same without you there xx